This weekend I participated in the NorthSec 2022 CTF with a bunch of friends who I either presently or used to work with. Overall, the CTF was really well run and incredibly fun! Today I wanted to talk about one of the challenges which was outside of my comfort zone that we ended up solving after a lot of work! I worked on this challenge with my teammates Mariana and Erin, which made it even more fun!

This challenge was called The Legend of Shiitakoin. I clicked into it on the challenge list to see that one of the attached files was an N64 ROM! It seemed like the main point of the challenge was going to be extracting flags via playing and reverse engineering the attached ROM. There was also an attached .out file, which at the time we were not sure of the format of.

Our first step was to run the ROM. Initially, my friend who I was working on the challenge with tried it in the Mupen64 emulator, and for some reason we got a blank screen. At this point, we tried running it in a second emulator, SixtyForce. This popped up a screen dripping in late-90s nostalgia: 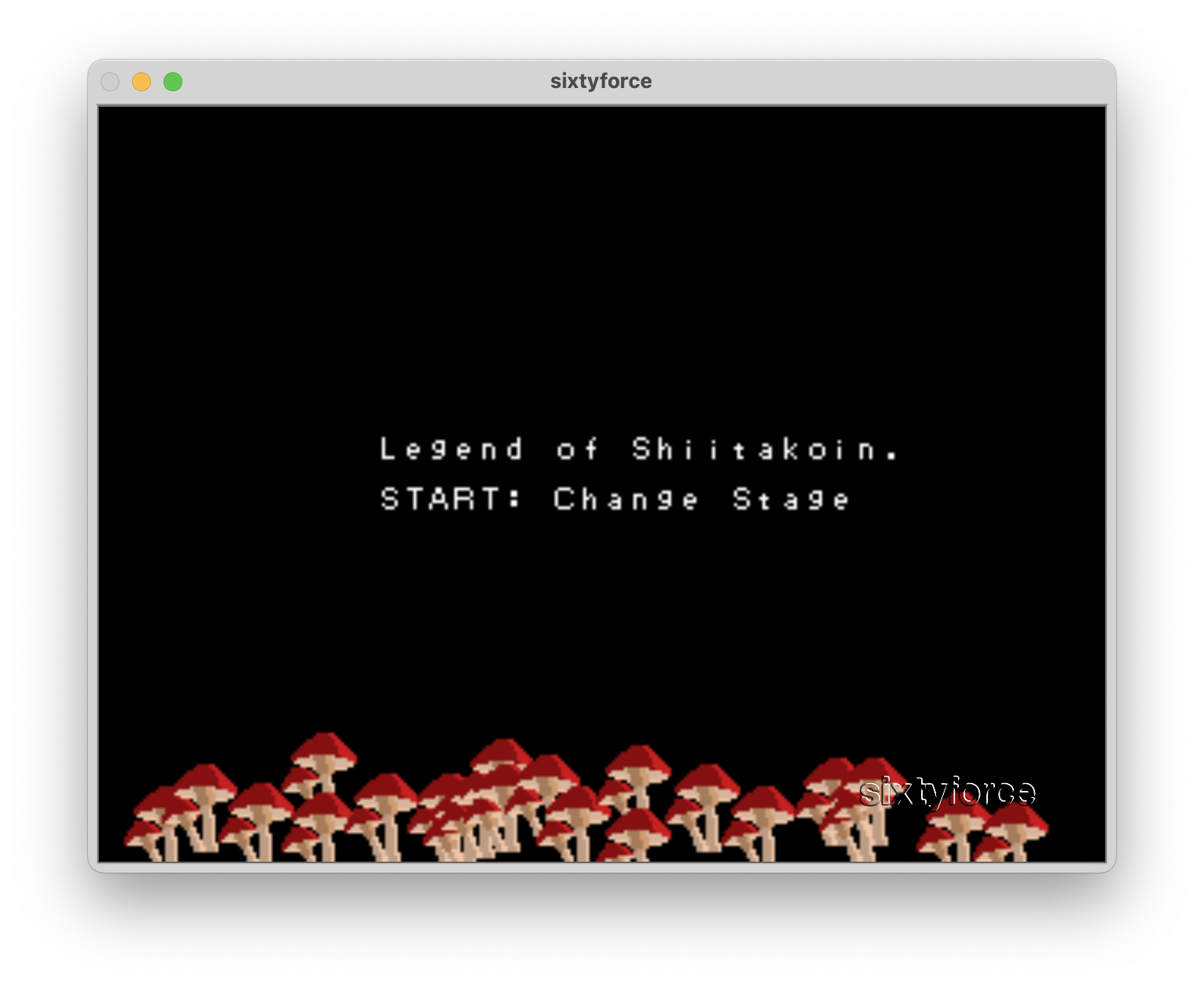 Pressing Start as instructed brought us to a screen with four hex numbers that, after a bit of fiddling with the controls, we realized could be incremented and decremented with the A and B buttons. We also learned that the Z button switched between the numbers. 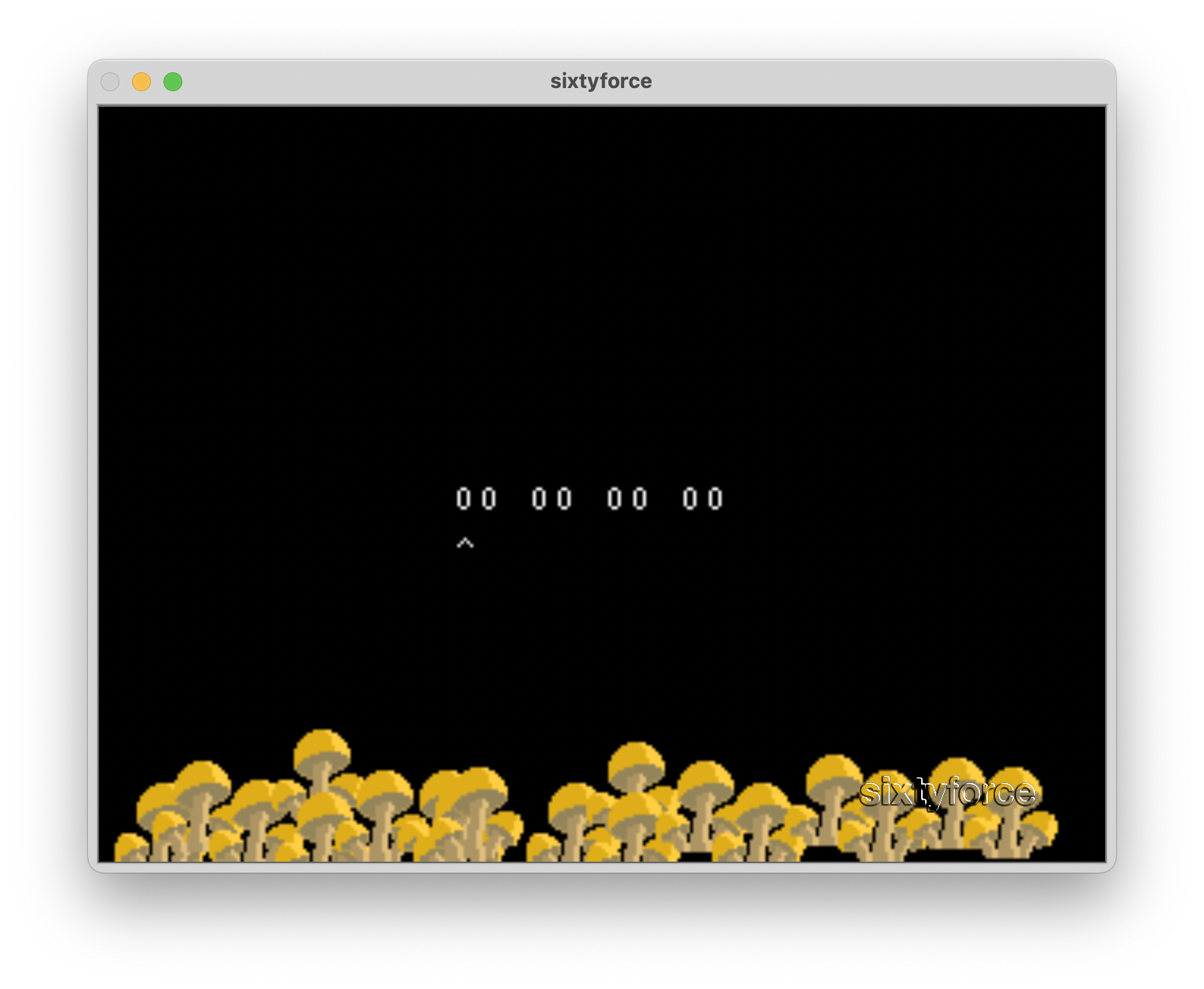 And pressing the right trigger (s in SixtyForce), the text “INCORRECT” would be overlaid on top of the numbers. Like any good hackers, this made us wonder “well, what’s the correct code” 😁

At this point, our attention turned to how to look at the ROM under the hood.

This lead us to the .out file which was included with the ROM. Running file on it, we got this output:

This let us know it’s an ELF binary for the MIPS instruction set. This is great, since a quick Google told us that was the N64 instruction set! We tried the binary in Ghidra. Unhelpfully, it prompted us to tell it what compiler and variant was used. To be honest, I had no idea the answer to either of these questions! After guessing, we received a blank project.1 This made us try it in a different reversing tool, Binary Ninja. I’m usure why, but for this reason we continued with Binary Ninja.

Finding stage 1 in the code

The first thing that stood out to me was that the .out file had symbols included, which was a relief! This means most things would already have names. We easily found the main function, mainproc (abridged and simplified for space):

This is (mostly) normal C code. It loops forever, then checks the current stage number. If it’s 1, it calls an initialization function. Then it calls nuGfxFuncSet. After a bit of Googling, we realized this was actually part of the N64 graphics API! The docs are here. It sets a function that is called roughly every frame (I think, some of the docs are a bit unclear).

The address passed in (0x80025e5c) is for the function stage01. Clicking through, it seems like this function calls two functions: makeDL01 and updateGame01. We reversed the majority of makeDL01 before realizing it was all graphics code and likely not part of the solution. I’m happy for this since I learned a lot about the graphics APIs for the N64! 2

updateGame01 contains the code for handling controller inputs, i.e. the “logic” of the stage. In this function, nuContDataGetEx is called, which according to the homebrew docs returns a non-specified structure containing the data from the controller. From this structure, the function extracts the button bitmap, and uses it to check if buttons are pressed. For example, the right trigger is checked with:

From my understanding, (contdata + 6) is the button element of the controller data struct (it may be the second byte of the 16-bit integer). The & 0b10000 takes only the 5th bit, which represents the right trigger.

a b, z, start, and the right trigger are all handled similarly. interactiveScreenShow is the function that checks if we got the numbers correct, so let’s jump in.

What are the right numbers?

interactiveScreenShow copies a weird base64 string beginning with GQMXGTN into a buffer, then calls evaluationRoutine. This function contains a bunch of rules about what our four numbers can be. For example:

The rules vary, but for numbers 1, 2, and 3 they are mostly various forms of XORs and ANDs.3 I wrote these rules into our shared Discord instance, kind of dreading how we would actually resolve all of them. Then another friend suggested we bruteforce the numbers! It’s only 32 bits total (4 8 bit numbers), so a small C program could do it easily! So that’s what we did. Source code for that program can be found here.

Compiling and running this code we get:

Entering this into the game, we get the flag!! 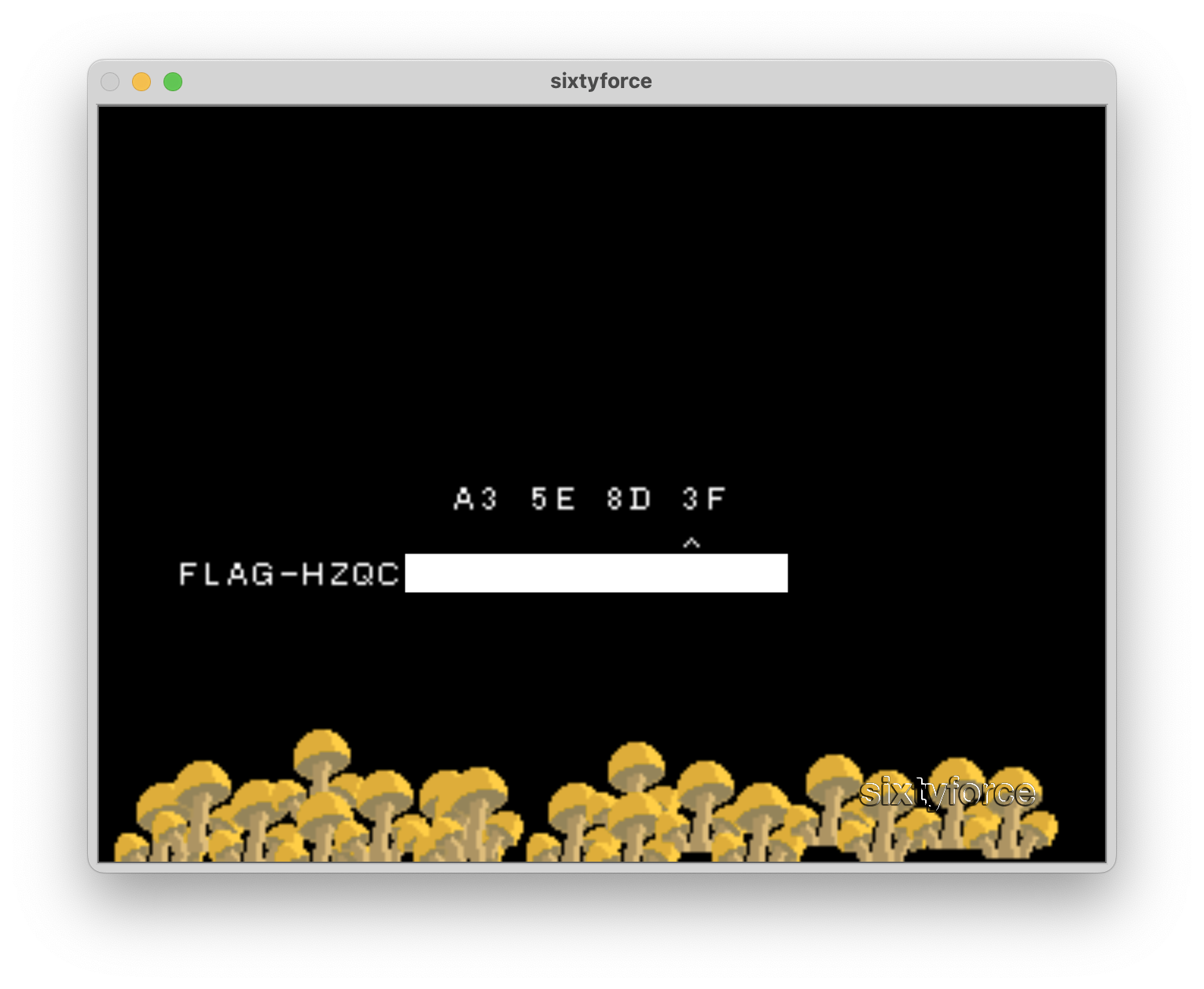 After pressing start again, we got to another screen: 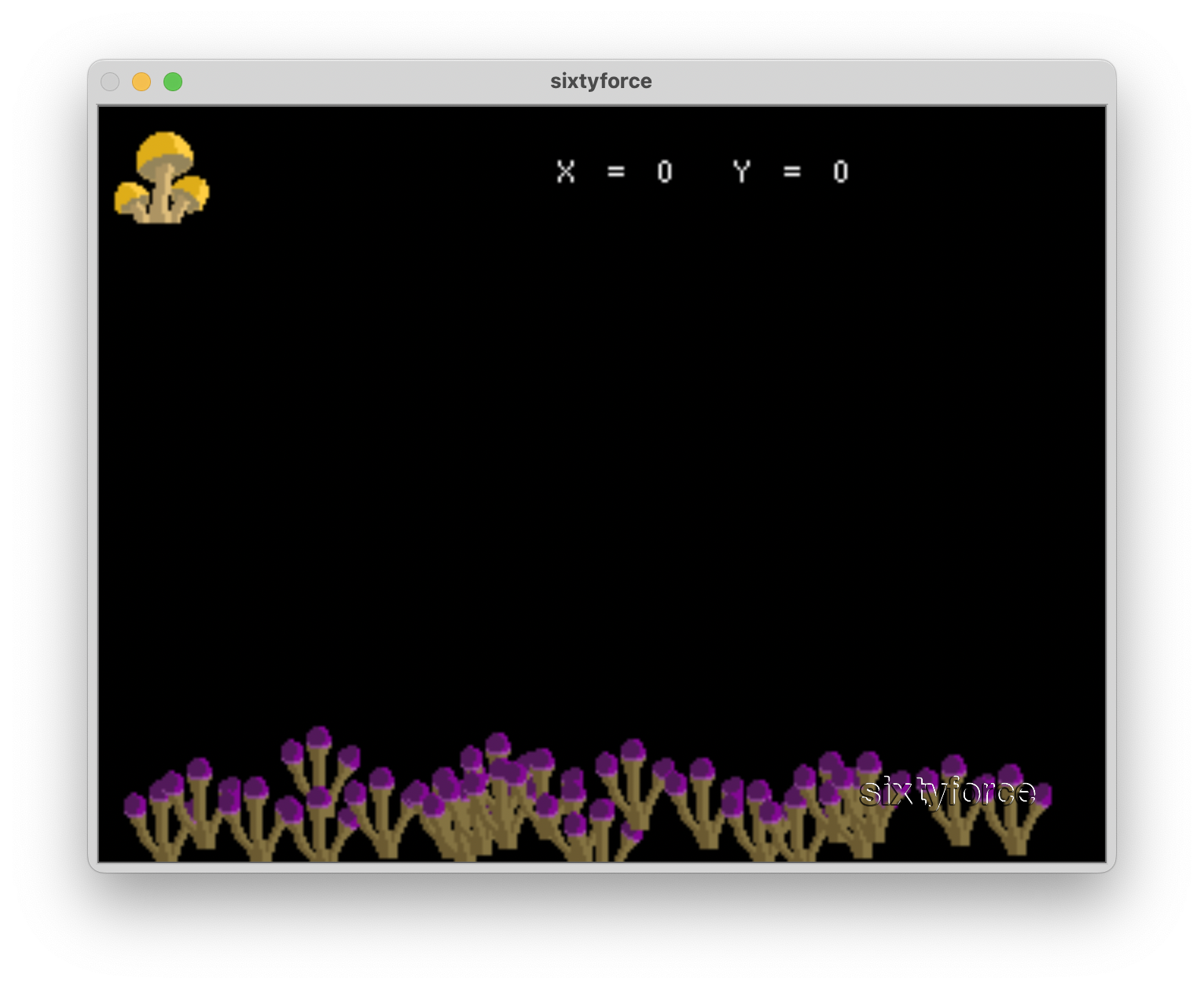 On this screen, we found out that the left DPad (the i, j, k, and l keys on SixtyForce) moved around the X and Y of the mushroom.

Stage 2 is very similar to stage 1. The X and Y positions are put through a long series of rules to determine which values are allowable. This time the rules tested each bit of each coordinate individually (see screenshot for some examples). 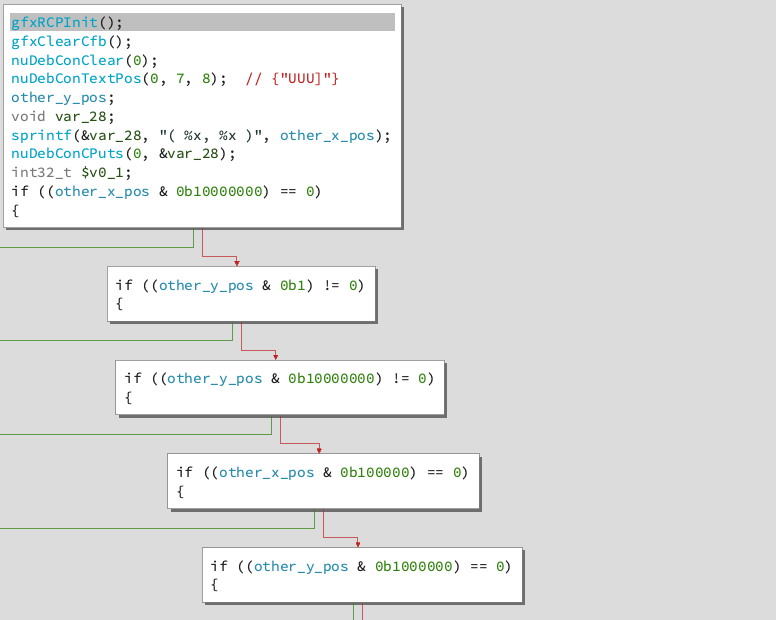 We wrote another program to bruteforce these rules. We ran it:

Inputted it into the program… and it was wrong! Not going to lie, we were pretty dejected at this moment. We didn’t have an easy way to debug the ROM. Thankfully, after reexamining the challenge description, it mentioned Project64. This emulator has a built in debugger, which is exactly what we need! It only runs on Windows, but one of our teammates lent us their Linux machine with wine.

I don’t have screenshots, but we ran through the evaluation function proceduralOperation one instruction at a time. We found that for the third least-significant bit, the check failed! It seems the binary ninja decompilation was flipped. We change that bit to a 0, giving us a3, inputted it and got the flag! 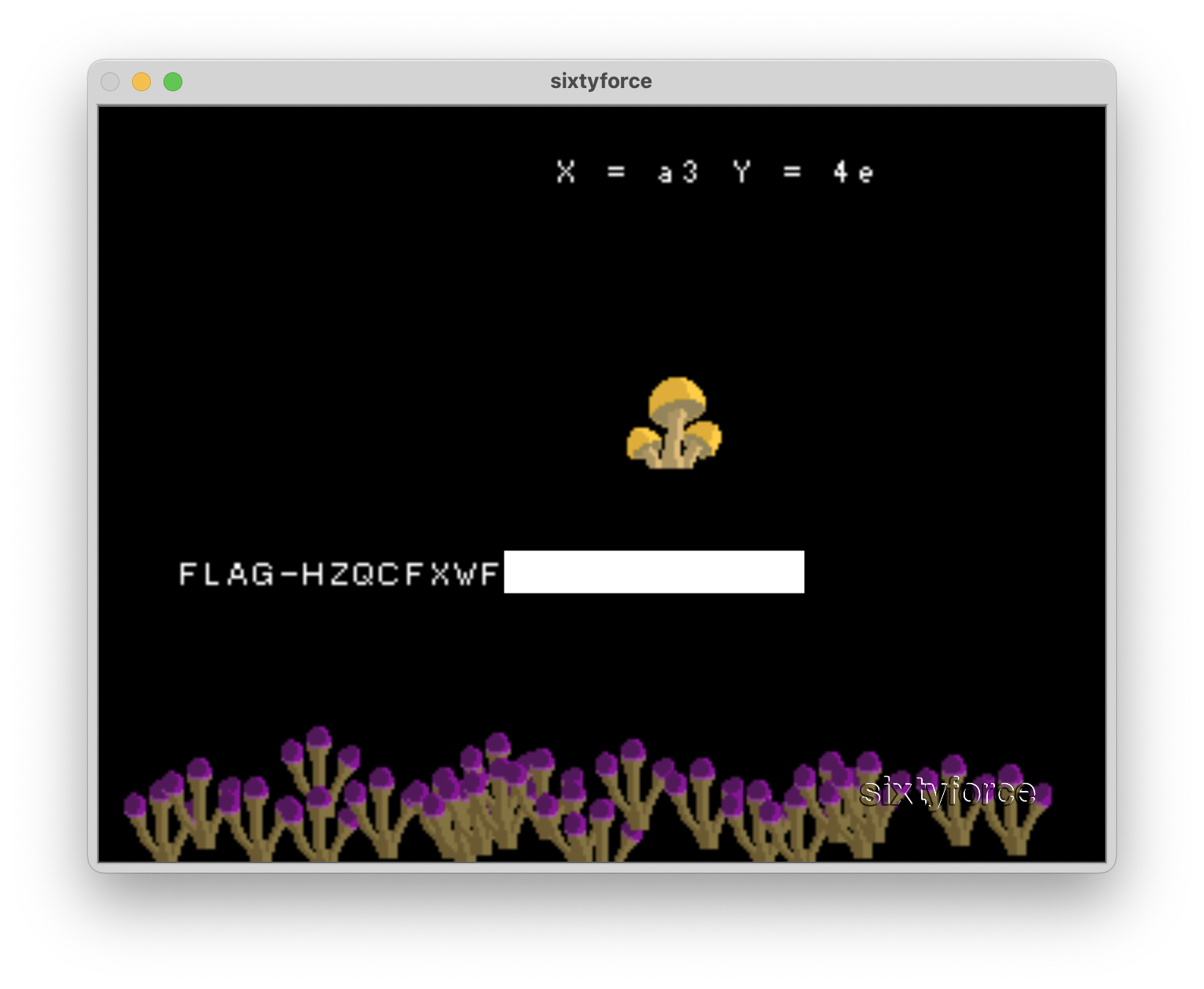 All in, this challenge probably took us 8 hours. As someone who isn’t super experienced in reverse engineering, I feel like this was right at the limit of do-ability for me.

Thanks to the NorthSec team for the CTF, to my teammates, and to Zack Deveau for putting the challenge together! Cheers.